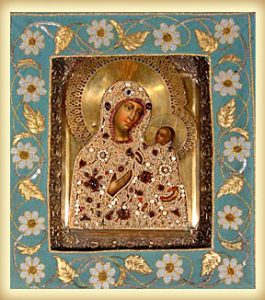 The Tikhvin Icon of the Mother of God

On the feast of the Nativity of Christ in 1972 (January 7, 1973 (new style)), Lakewood, NJ, resident Olga Vasilievna Astori-Astafieva, in an act of pious conviction, passed along to our church of the Right-Believing Grand Prince St. Alexander Nevsky an icon of the Mother of God of Tikhvin (celebrated on June 26 (old style)). This wonderful image, painted on a wooden board about 27x32cm, is covered in a silver mounting with a patterned halo. Above the first mounting is a second, splendid, inlaid mounting, fully sewn from river pearls and mother-of-pearl, and decorated with precious stones from royal icon mountings of the Novodevichy Convent in Moscow. Though the icon is old, the Countenance of the Mother of God and the Godchild has been wondrously preserved, their calm, soft gaze summoning the tenderness of worshippers.

From the personal conversations of the rector of St. Alexander Nevsky Church, Protopresbyter Valery Lukianov, with the owner of the icon and based on the eye-witness accounts of Barbara Mihailovna Charakos, a deeply pious woman with whom Olga Vasilievna shared much about her life in Russia, a short history of this icon has come to light. It bears mention that it was on the recommendation of Ms. Charakos that the icon was gifted to our church.

The mother of O.V. Astori-Astafieva, Trofimova (née Ivanova), a former serf, had a great talent in sewing and embroidering dresses. This natural ability and enterprising talent distinguished her as one of the foremost specialists in sewing and embroidery of dresses, which caused her to be presented to the Sovereign Empress Maria Feodorovna, who appointed her as an outfitter for the royal court.

Trofimova’s studio was located in St. Petersburg. On the occasion of the Tercentennial of the House of the Romanovs in 1913, Trofimova received an order for the manufacture of splendid garments for high-ranking officials. Having completed the order of the royal court, Trofimova set off for Moscow (where the jubilee would be celebrated); but a tragedy befell her in her train car: one of the large containers of royal garments fell from the top shelf onto Trofimova’s leg, causing her serious injury. In Moscow, the Empress, having found out about her injury, undertook the warmest care of Trofimova and, wishing her speedy recovery, sent her to recuperate in the Caucasus, to which she traveled in the accompaniment of her daughter, Olga. But recuperation was not helping; the wound refused to heal, and with the threat of gangrene setting in, the situation became dire. With every day, the danger became greater, and the doctors decided to amputate the leg. In this great danger, on the eve of the day the operation was to take place, her daughter Olga had an extraordinary dream: she was a little girl, walking through a rye field; suddenly she was illuminated by an extraordinary light and heard a voice: “I know that you are bitterly sorry for your mother! Grieve not, for the operation will not be needed. Go immediately to the spring that I will show you, and there your mother will receive healing.” In her dream, Olga remembered the location of the spring as she was told.

Mother and daughter obeyed the voice from above and went to the spring shown in the dream, and there Trofimova was completely healed.

Upon their return from the Caucasus, the Empress greeted her healed seamstress with joy and love, and in memory of the miraculous mercy of God bestowed upon Trofimova, gave her one as a gift one of her personal icons, the Tikhvin Mother of God – the same icon that now resides in our church as a gift of her daughter, Olga Vasilievna, who received the icon as a blessing from her mother. In her 87th year of life, feeling her strength leaving her, Olga Vasilievna came to a decision to donate this holy icon to the nearby church in Lakewood. She reposed on January 10/23, 1975.

In 1994, the construction of a new cathedral on the church grounds was completed. In connection with this, faced now with the existence of two churches in the parish, the Holy Synod gave its blessing February 15/28, 1994, to consecrate the new cathedral in honor of St. Alexander Nevsky and rename the old church in honor of the Most Holy Mother of God, in Her Tikhvin icon. From that time this “royal” icon has become the namesake icon of this little church, and the adornment, blessing, and protectress of the appanage of the holy prince Alexander.